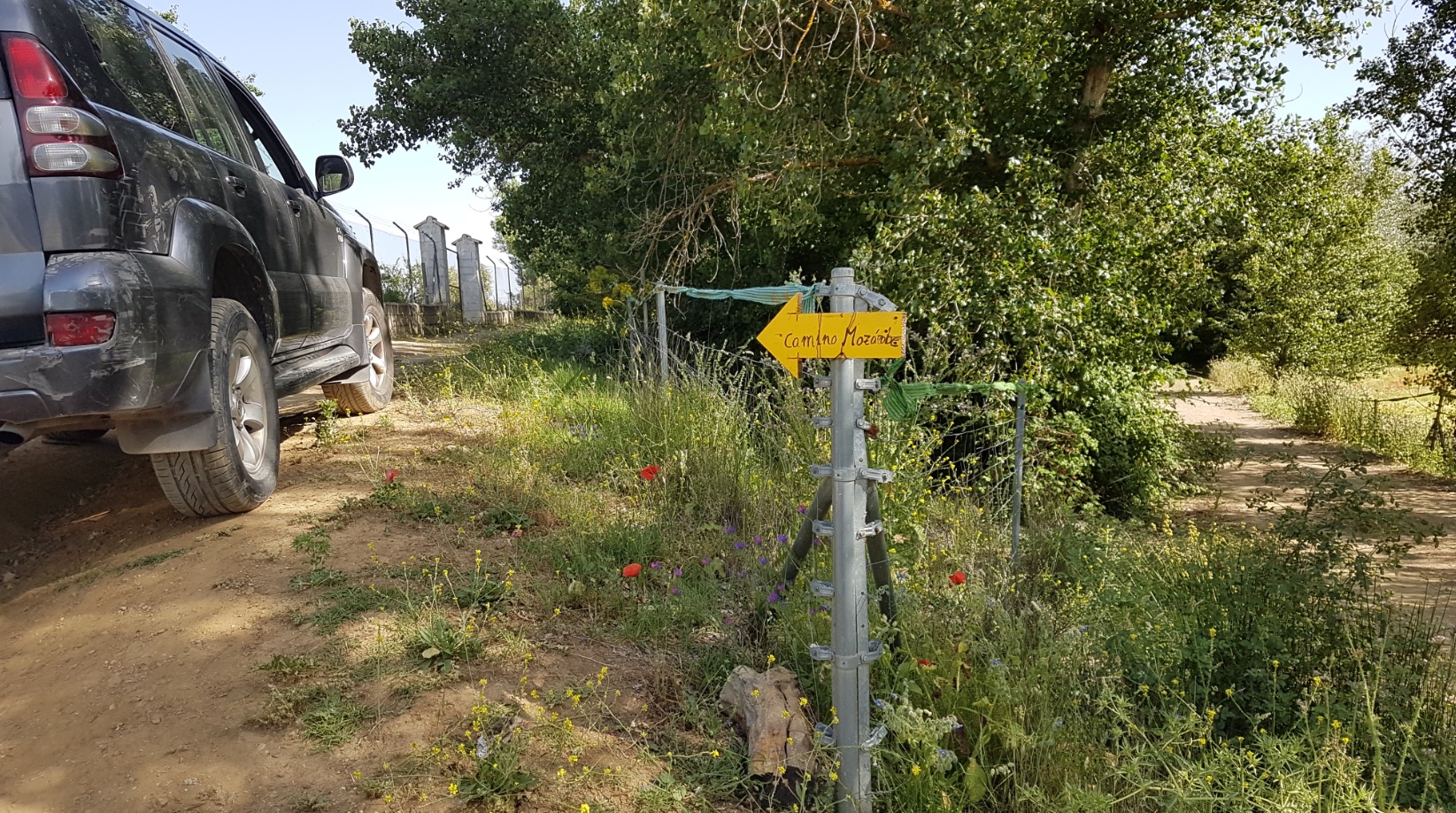 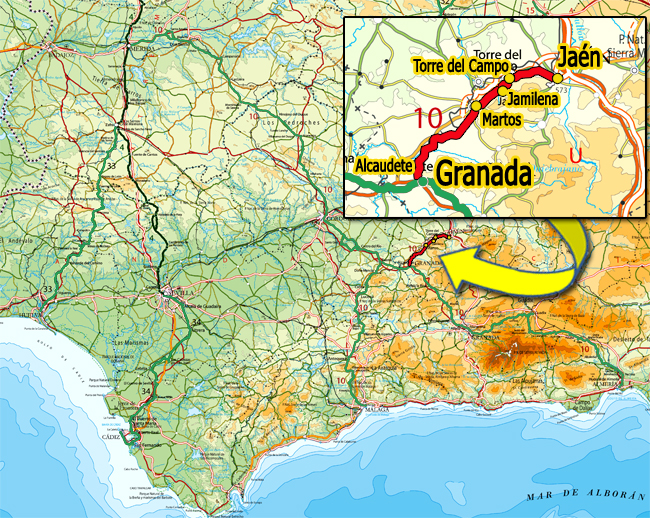 The well-known Mozarab Way was used by the Christians who lived in the Arabic kingdoms to get connected to the Via de la Plata until Santiago de Compostela. Being this route one of the oldest ones belonging to the Way of Santiago.

The Muslim domination started at the beginning of the VIII century over the best part the peninsular territory would end influencing the religious life of the inhabitants of the old Visigothic-Christian kingdom. Thus, once the news of the discovery of the Apostle Santiago’s sepulchre in Galicia was spread, the Christians who lived in the territories under the Muslim domination would try to go on a pilgrimage to Compostela. These Christians received the name of Mozarabs and got to carry on with their faith and consolidate their own religous culture.

During the intermittent periods of peace between the Christian North and the Muslim South the pilgrimage to Santiago’s sepulchre in Galicia was being forged. The itinerary followed from the Al-Andalus territories, current Andalucia, used the communication routes established by the Romans. The Mozarabs coming from Almeria, Granada, Malaga or Jaen merged into the former Cordoba to continue from there to Merida through the main route of communication.

The Way of Jaen 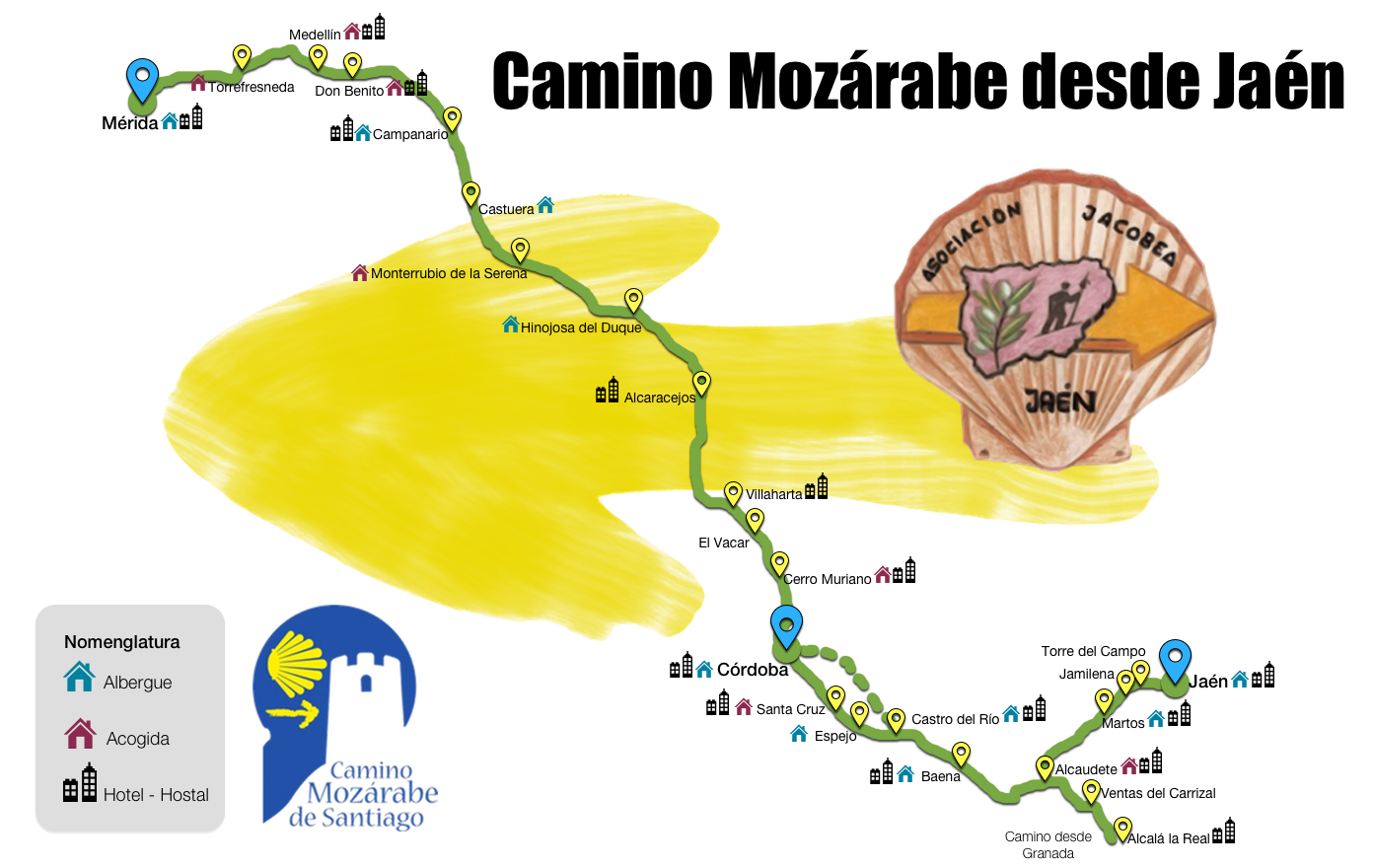 The province of Jaen counts with two routes of the Mozarab Way, both going over some lands of the Sierra Sur of Jaen. Those who go on pilgrimage through the track of the Mozarab Way, coming from the province of Granada, will step into the Sierra Sur of Jaen to find the watchful Fortress of La Mota de Alcala la Real, a Muslim bastion. They will pass by Ventas del Carrizal through La Vega of the San Juan River, with famous fruit trees, and they will arrive at Alcaudete, a village located at the feet of the Calatrava Order castle and Sta. Maria Church. This is a region of a historical importance due to its strategic position to control the paths and also because it marks the border between the Nazari and the Christian kingdoms. Indeed, there are defensive systems scattered all over this territory.

The pilgrims who start the Way in Jaen will do so from the Santa Iglesia Catedral to head towards Torredelcampo, Jamilena, Martos and Alcaudete, sometimes coming across the Green Way of del Aceite, and from here they will get to the province of Cordoba. Along this route, the Roman road of the Colonia Augusta Gemella Tucci coincides with what were the limits between the Council of Jaen and the one of the Mastership of the Calatrava Order. The pilgrims will find a very important reference, Saint Amador patron saint of Martos, a Mozarab Saint who is honoured with a religious ceremony on the 5th of May, in its festivity, under the Mozarab ritual. This legacy is preserved in our traditions being part of the cultural patrimony of the Sierra Sur of Jaen. We invite you to step into this land and to get to know us.

Have a nice Way! 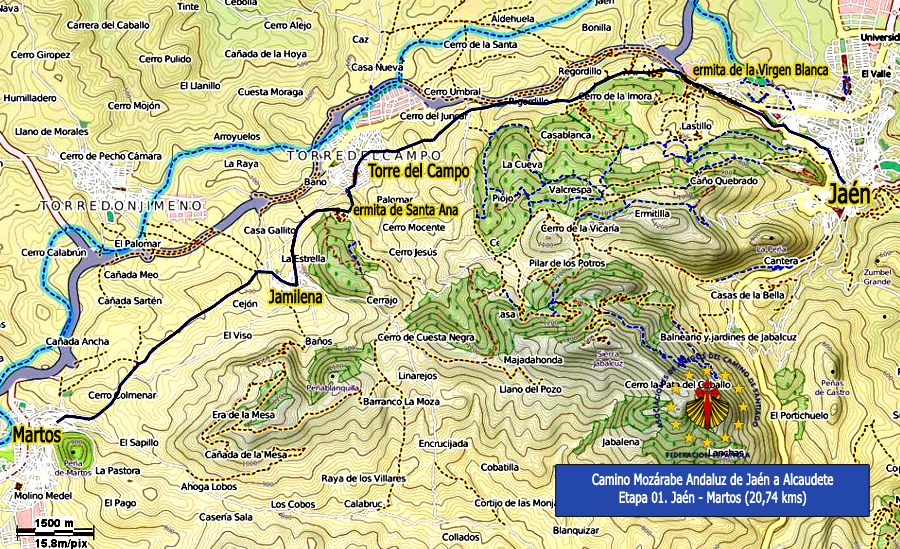 This first stretch of the Way begins at the Cathedral of Jaen and goes on along the former Roman Castu-lo-Malaca Road. The pilgrim will walk about twenty-two kilometres accompanied by a sea of olive trees, with its ups and downs from Jaen to Torredelcampo, crossing the ancient Roman road of Jamilena to get to Martos, the age-old Augusta Gemella Tuccitana where Saint Amador can be venerated, a Mozarab Saint and Patron Saint of the village. 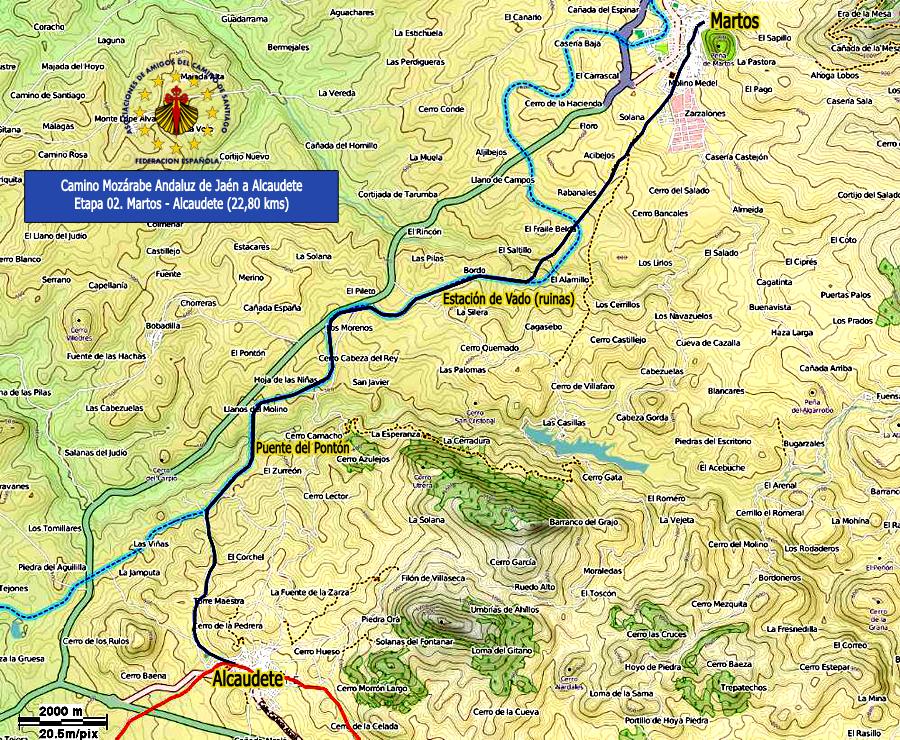 After crossing the historical city centre, the pilgrim will go down towards the Plaza de la Cruz del Lloro, obliged way since the Middle Ages and from there he will depart from Martos through the Way of the Fraile de Belda, accompanied by olive tree groves and country houses ro reach the green way of the olive oil. After crossing several bridges, we will see the “Pontón del río Víboras” of Medieval origin. At this point, we will head towards Alcaudete, a town presided by its castle where the Interpretation Centre of the Calatrava’s Order is located. 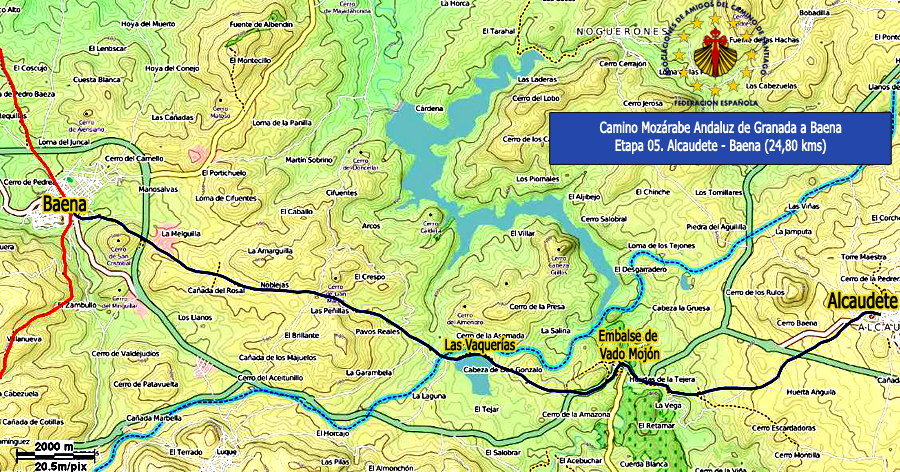 Alcaudete is located at the foot of the castle and the Church of Sta. Maria la Mayor. As the pilgrim exits this village, he will walk through a trail of olive tree groves which will lead him to the ruins of two country houses, La Tejera Baja and Alta. Following the Way, the pilgrim will go around the small lake of Salobral crossing the Green Way and from here, following the yellow arrow, will get to Baena where, in 1555, pilgrims were already hosted in the Hospital of La Caridad. 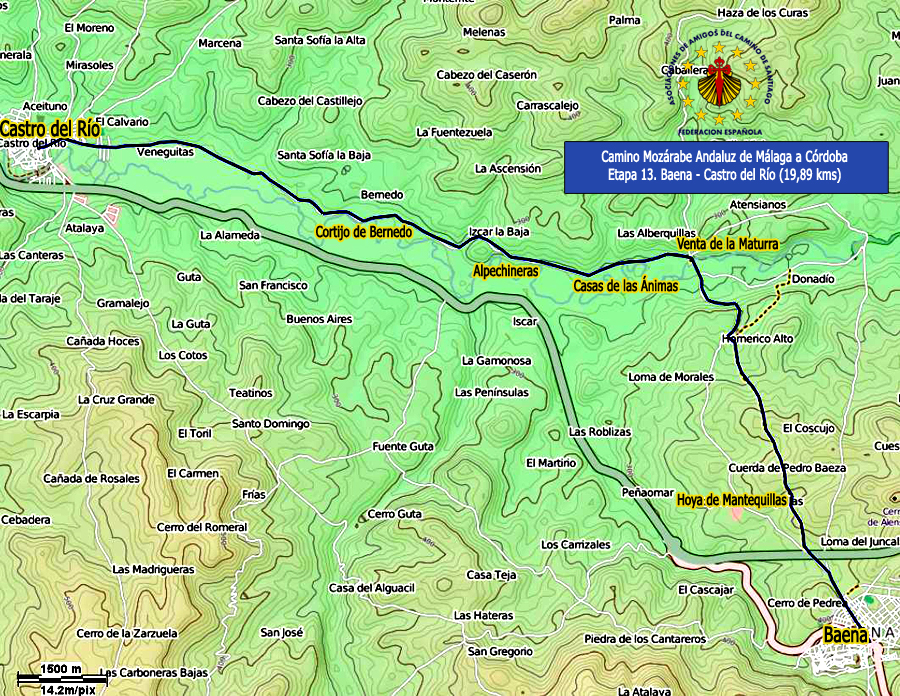 The Valle del Guadajoz is the place through which this stage runs. A stage the pilgrim will not only find fresh but also flat. He will also enjoy the countryside where olive tree groves have gained ground to the traditional cropped steppe. 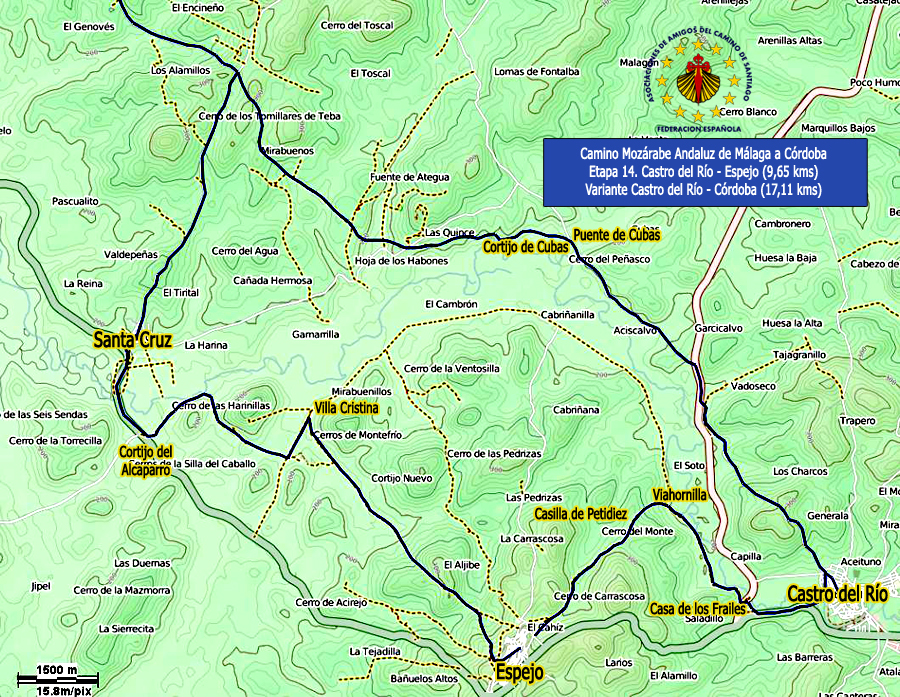 Castro del Rio, with its orchards, olive tree groves and important timber industry is located near the Guadajoz River. Leaving the “Barrio de la Villa” we will cross the river again and we will continue along its bank for some kilometres. Later, we will ascend and see the village of Espejo from the top, crowned by its Castle. 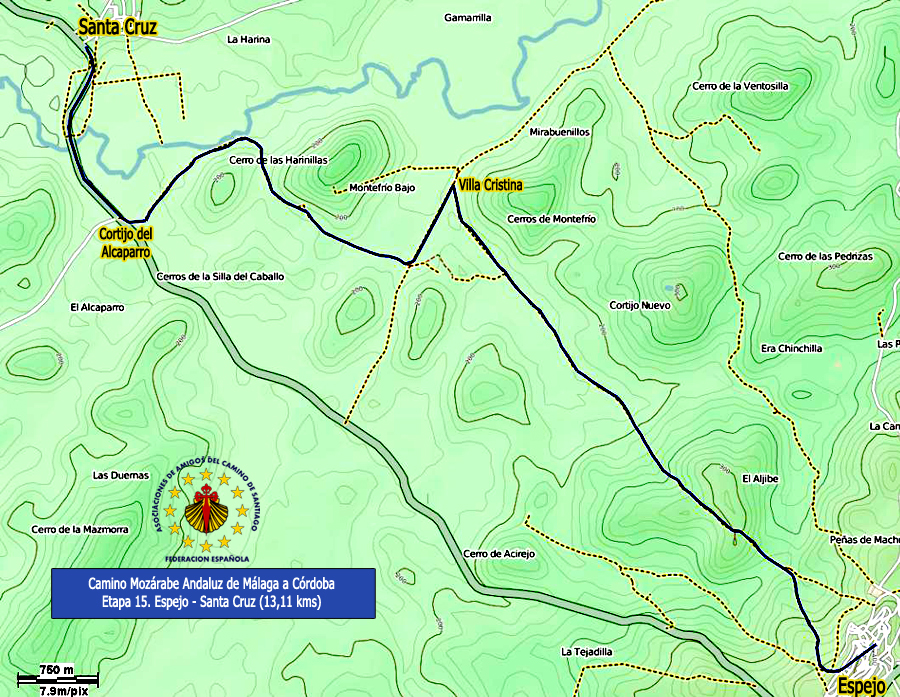 Awesome views of the Cordoba countryside from Espejo’s Castle. Soon, at Espejo’s exit, we will find an astonishing sample of a small Roman bridge. Several kilometres ahead, we can see again the Guadajoz River which the Way goes along its bank until the Cordoba-Granada road, which will lead us to Santa Cruz. 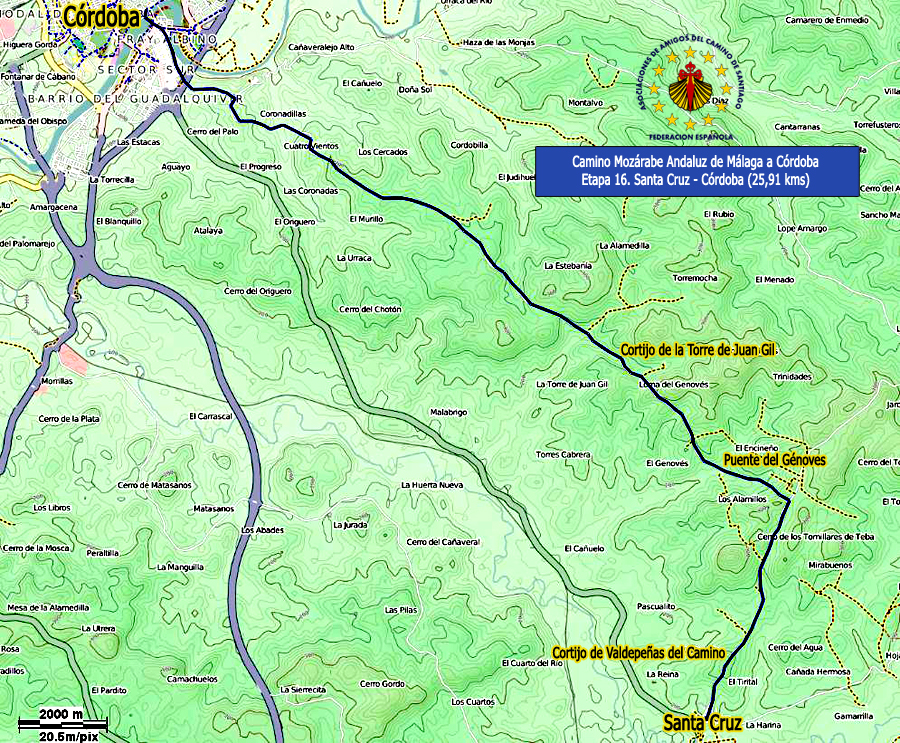 Last stretch to get to the City of Cordoba. The landscape changes, from the olive tree groves, which used to accompany us along many of the previous stages, to the typically cropped landscape. A change in colours, spaces… until we see Cordoba with its Mosque in the background, scattered all over the plain next to the Guadalquivir River and is silhouetted to the North by the Mountain. 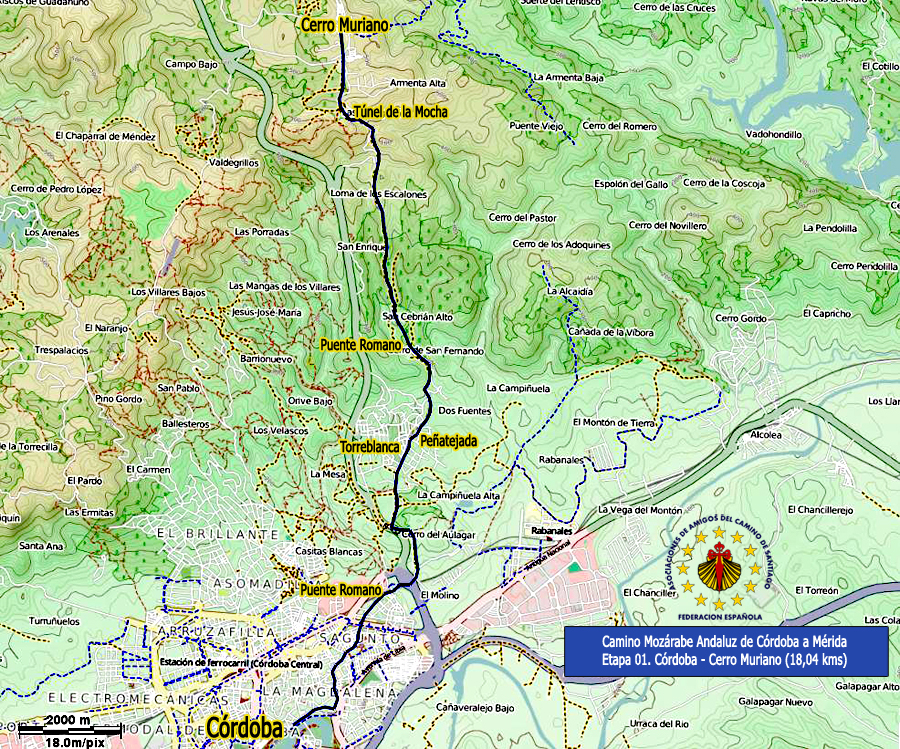 Stretch which starts at the very core of the historical urban centre of the city of Cordoba, declared World Heritage City and which during 16 kilometres will lead us through the neighbourhood of Cerro Muriano, already located at the Cordovan Sierra Morena and crossing gorgeous settings and places full of Roman reminiscences: Roman bridges, mines and roads. 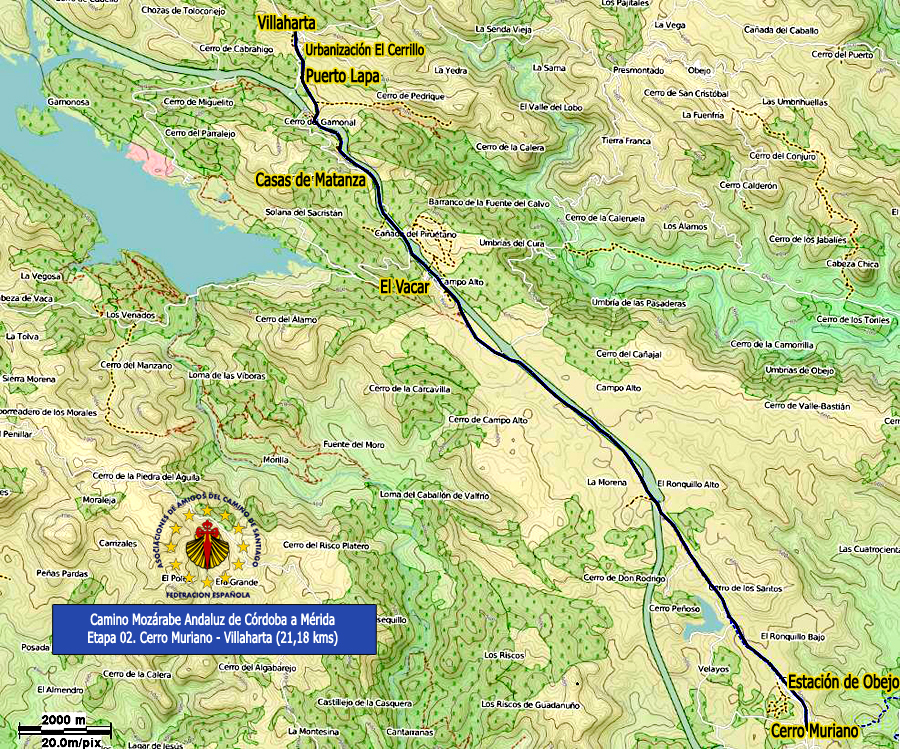 In this stage the historical legacy can be seen both in the communication vias through which we will go (Roman roads, Cañada Real Soriana or the GR-48 Path) and in the Del Vacar Castle or the sour fountains of Villaharta whose waters have been very used due to their medicinal properties. The most common landscape we can see will be that of the vast holm oak tree pasturelands and that of the varied Mediterranean scrub. 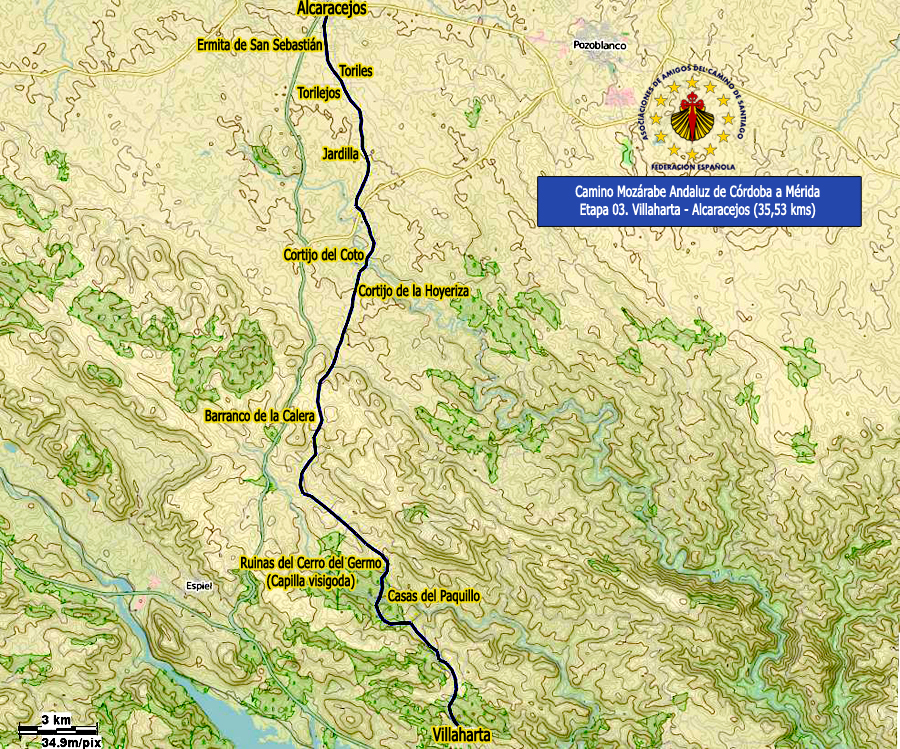 The Way departs from Villaharta to Los Pedroches following the Cañada Real Soriana. The holm oak trees, myrtles, rockroses together with other species from the Meditarranean forest will accompany the pilgrim in his ascent towards the Puerto Calatraveño, where a sculpture by Aurelio Teno welcomes the pilgrim to the peneplain of Los Pedroches. The Way descends towards Alcaracejos as the Mediterranean forest gives way to the Dehesas where the Iberian pig is bred. Then, the Way gets connected to the Vereda de Cordoba- Almaden to enter Alcaracejos. 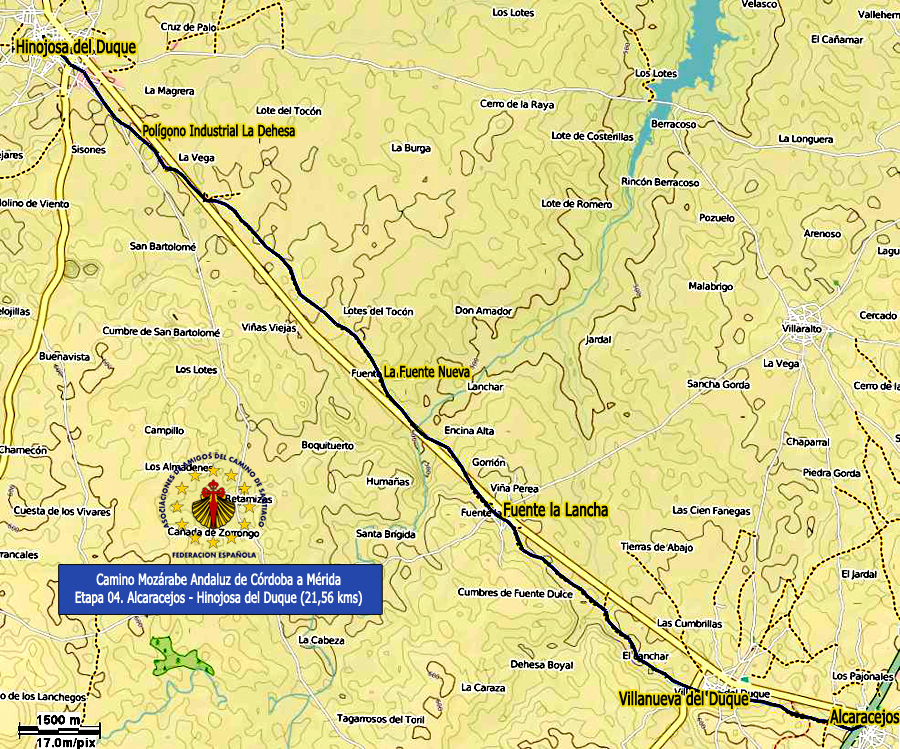 Heading Southeast from Alcaracejos we go to Villanueva del Duque. The Way goes on towards Fuente la Lancha along pasturelands which, little by little, are less dense and the Del Lanchar Stream crosses half way between those two villages. The Path departs from Fuente la Lancha to cross the A-422 road from south to north to, later on, pass the River Guadamatilla and cross again the A-422 road from north to south at the height of De la Dehesa Stream. Finally, we enter the urban stretch of Hinojosa del Duque. 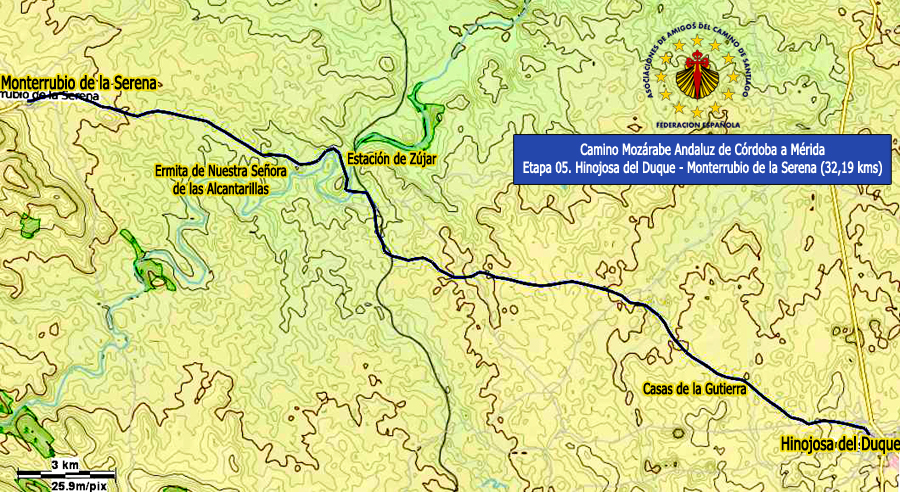 We leave Hinojosa del Duque behind together with the typical Dehesas of Los Pedroches to get to areas of cropped fields. From here we get connected with the Vereda de la Cruz de Correa and we cross the De la Dehesa Stream. A slight and flatty route which crosses two roads after leaving the Vereda de la Cruz de Correa and connecting with the Vereda del Camino de Almorchon until we arrive at the Shrine of Nuestra Señora de Gracia de las Alcantarillas. From here, the path gets to Monterrubio de la Serena. 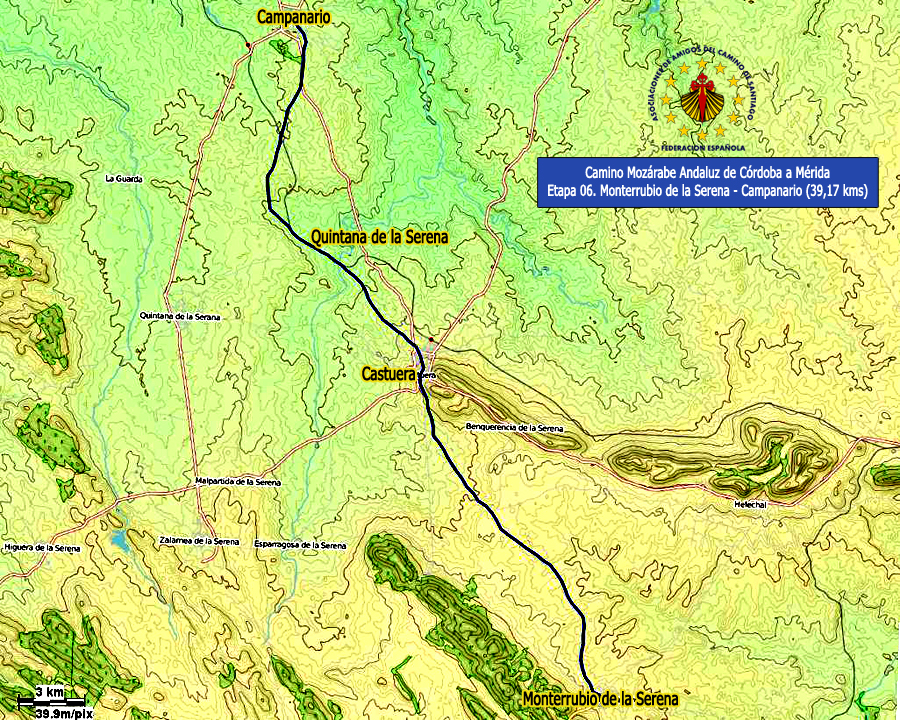 The formerly called “Camino de los Moros” steps into La Serena. The ancient land of the Order of Alcantara welcomes the pilgrim with hundreds of olive tree rows. After leaving Monterrubio behind, the Way runs mainly on flat terrain till it gets to Castuera. Leaving the “ciudad del turrón” behind as well, and after several kilometres we will ford the Guadalefra Stream. From there on, the pilgrim will be accompanied by holm oak trees for a long stretch. 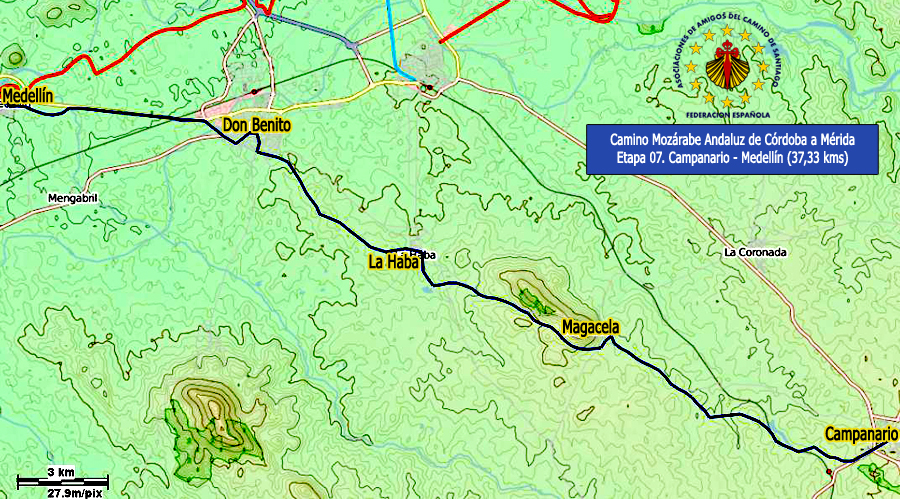 After Campanario, the Way goes through ploughed fields. Right near the prehistorical site of La Mata, Magacela will be in sight. La Haba is the last village of La Serena and also marks the border with the Vegas Altas. Don Benito is its capital and will be left behind through a flat path surrounded by irrigated plots on one side and by the road towards Medellin on the other side. 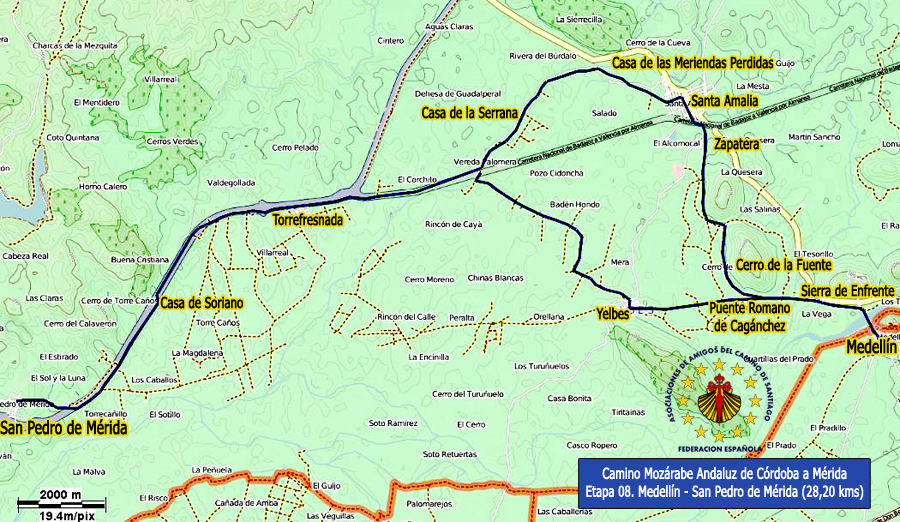 The stretch starts crossing the Guadiana River over the centenarian bridge of Carlos V. Taking the road to Yelbes we deviate through the Cañada Real towards Santa Amalia. Leaving its straight streets behind, the path will run among irrigated fields. Once we pass the Burdalo River it’s necessary to walk along a stretch of the N-430 road to Torrefresneda. The arrival at San Pedro de Merida will be preceeded by a slight but long ascent. 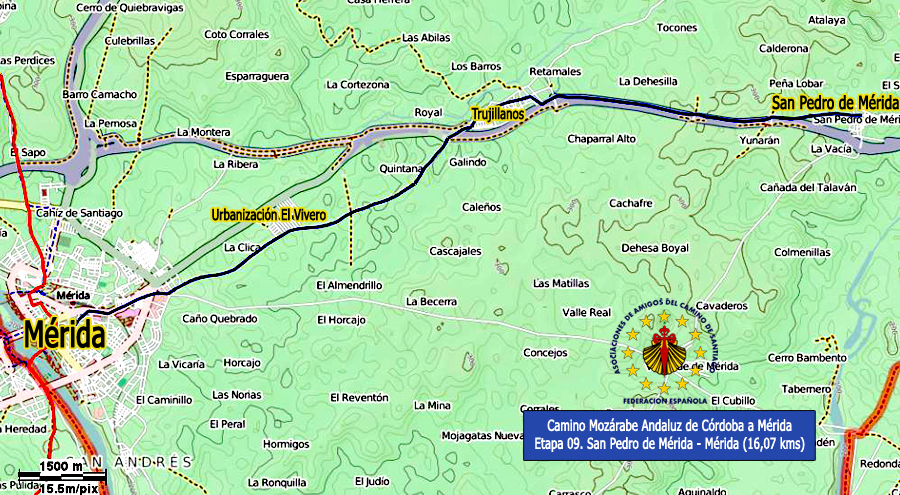 This stretch, along its route to Trujillanos, will have the dehesa landscape as protagonist. The pilgrim will go around the Natural Park of Cornalvo, passing in front of its Interpretation Centre before he crosses the streets of Trujillanos. From this village, and circumventing the Badajoz-Madrid motorway, we will head towards Merida. As we enter it, the first monument the pilgrim finds will be the Shrine of La Antigua.